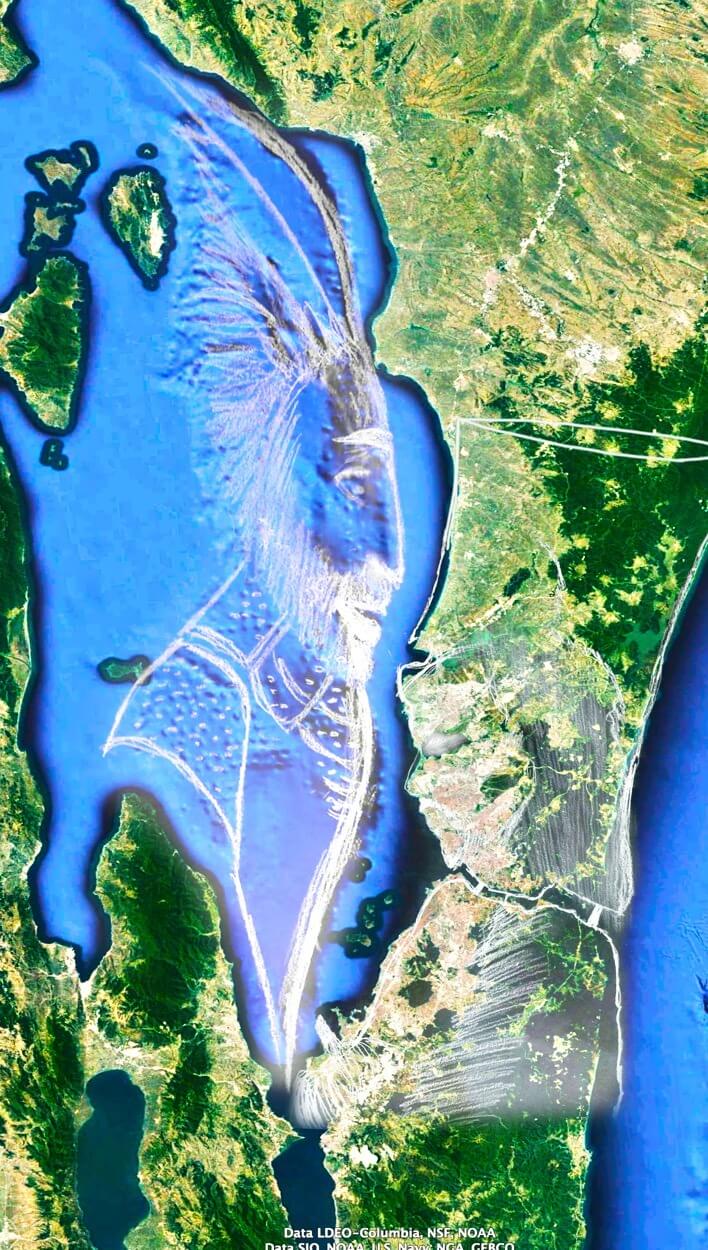 HUMAN AND ANGELS IN ISTANBUL

There is someone in the brain of a big human silhouette. A person to be chosen to be the ruler of humanity? Or who? 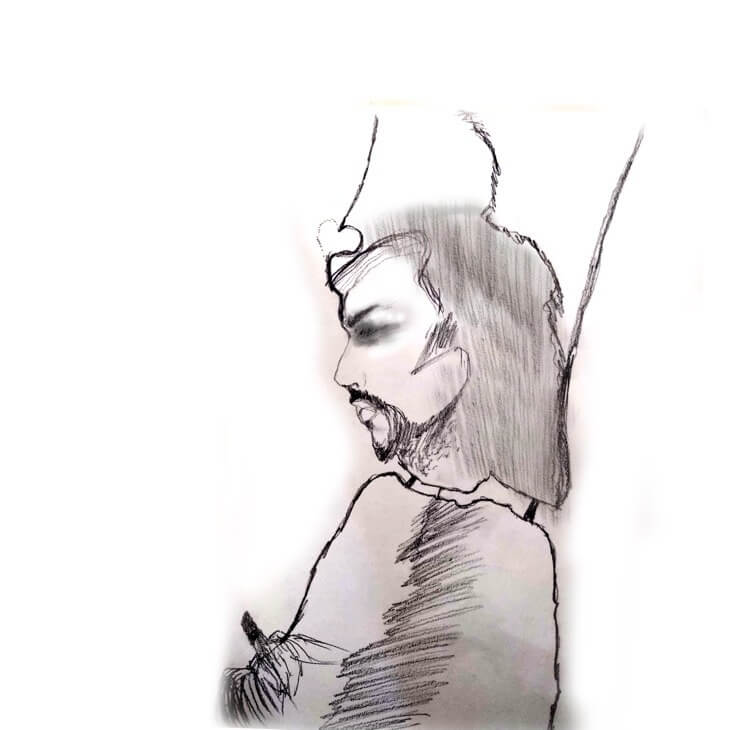 Many years ago, in 2011, our esteemed brother Ferdi Yılmaz called me. I never knew him before. He said he had a great discovery that he saw a human silhouette on the shape of Istanbul from space. I came from Istanbul and came to Ankara, and I was one of the first to see this discovery. ”You have to tell this to the world, make a documentary of it,” he said during our meeting. He also said that an island should be built in the bay cavity called the big drawer in the crown and that it should be monumentalized. In his opinion, this was probably Fatih Sultan Mehmet (the Conqueror), and something that emphasized this situation and added value to the region had to be done to what he saw as the diamond point of his quilted turban. We worked with him for a while. But he wasn’t interested in the authorities that were supposed to.

Years passed and now the shapes on the world, Sirat-ı Müstakim road and symbols in Istanbul began to be expressed. There is also a connection with the figure here.

Unlike the other surrogates, I wanted to remember him because the discovery of the surrogate engraved in Istanbul does not belong to my self and has an interesting story. I want to commemorate this brother by expressing my love and gratitude to this brother who has chosen me among all these people to convey his precious discovery about Istanbul to humanity.

However, I may have seen and added this figure to the shape of the Fatih silhouette in Istanbul that you may have heard before.

Each of these shapes is very meaningful and there is a wise creation above the analogies. I will present their evidence.

I knew that the silhouette in Istanbul did not belong to Fatih. Because the shape of Fatih’s nose was very different and did not fit the person here. Even though it was said that sand was drawn from the nose from time to time, the nose did not change its shape or be visible from space.

We realized that the earth is giving news, and surprisingly, it always comes from the future. Let us continue to examine the earth as the most immense journal of the world with the admiration and respect of that unique painting drawn by God. 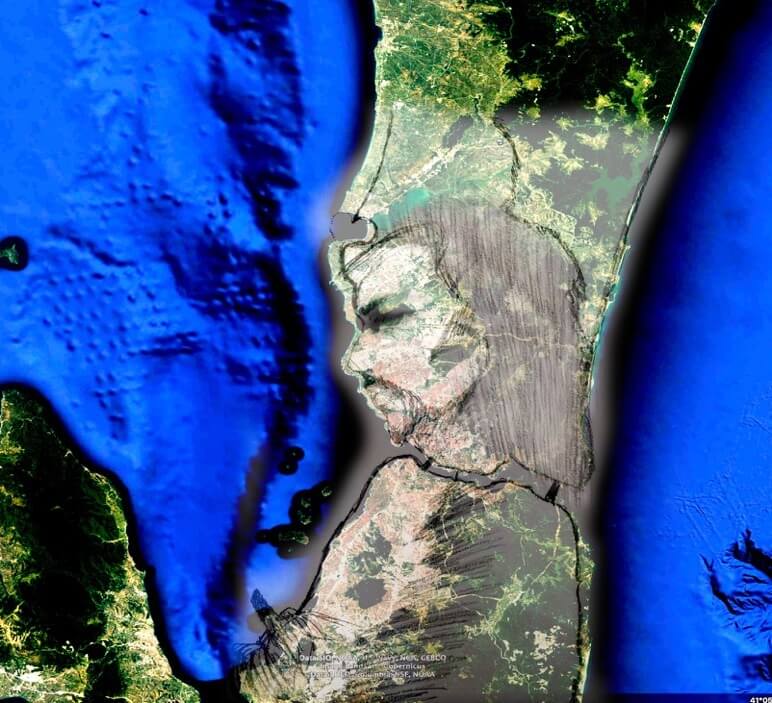 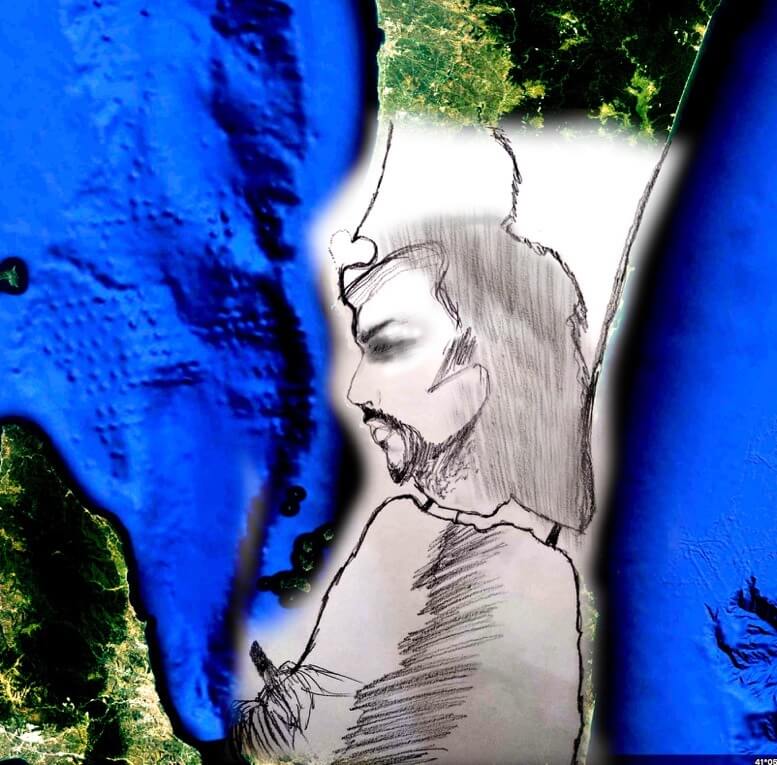 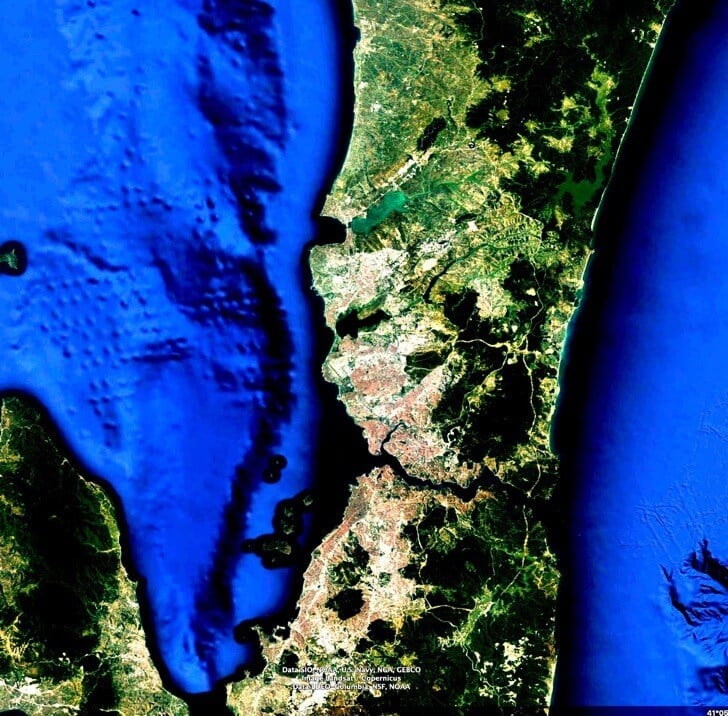 Since the symbol on his forehead was visible from the side, only half was visible. I looked at the symmetry of the shape to see what it would look like when the whole one appeared and I saw it was a heart shape. Was it a heart-shaped diamond, a simple stone? Or is it a descriptive feature or a special sign? Time will show that.

But it reminds us that both the Bible and the Qur’an have signs that identify which sides of the faces and foreheads are on which side.

This is such a wise and interesting human silhouette that;

After all, those who say that this is a fictitious and meaningless form, mockers are brainless. God’s fates, place and content with great power to change the language of wisdom drawn to those who curse. Let them continue to denounce and ridicule. He who submits to the earth will bend their necks to the pit they deserve.

IN ISTANBUL; SILHOUETTE IN THE SEA 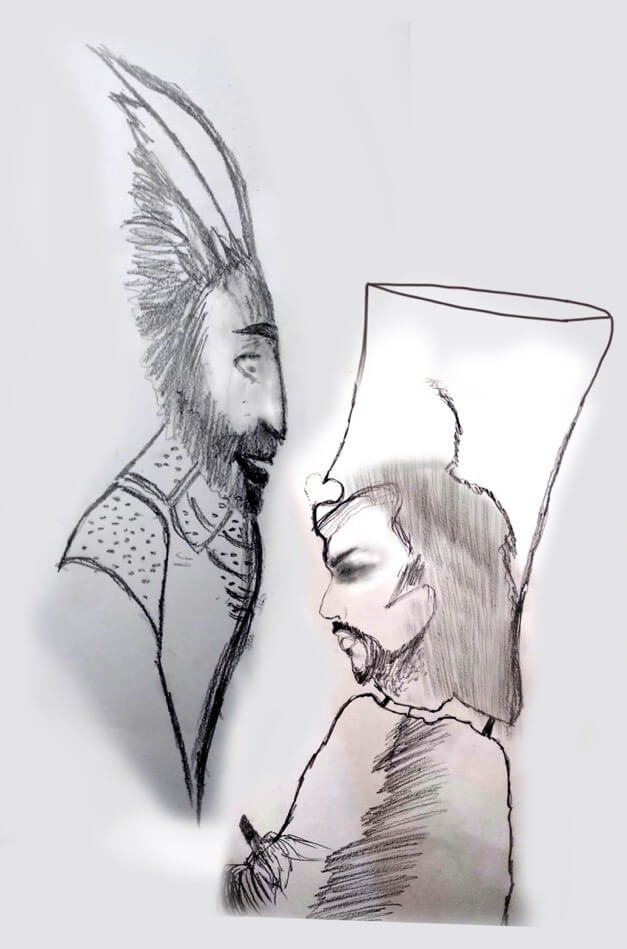 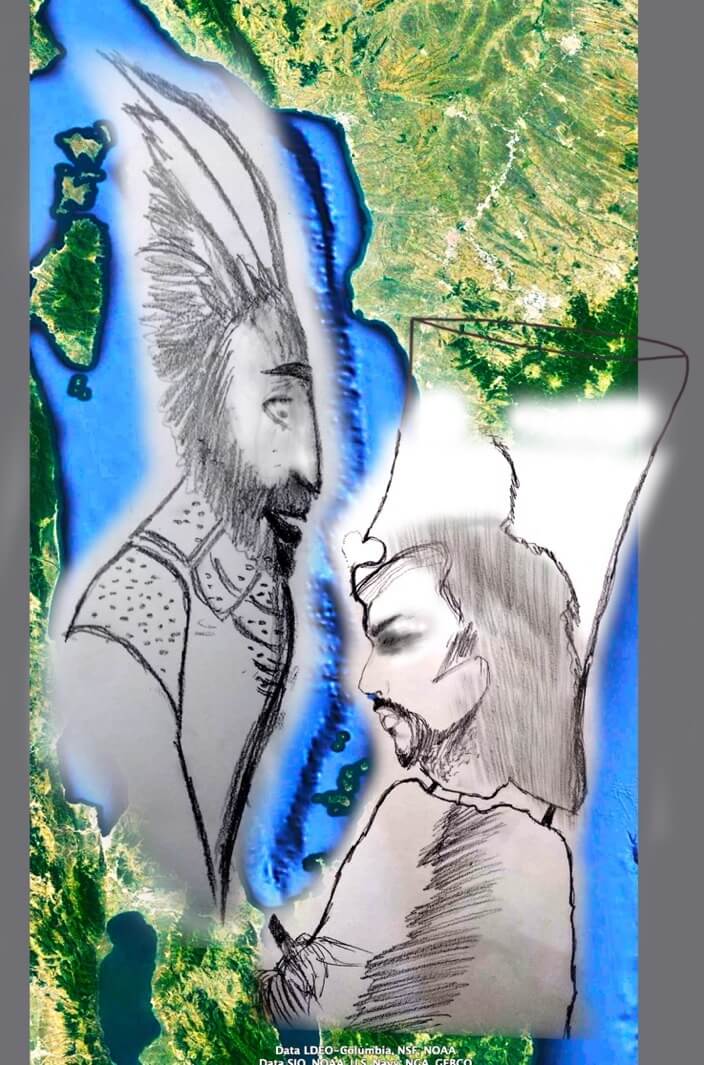 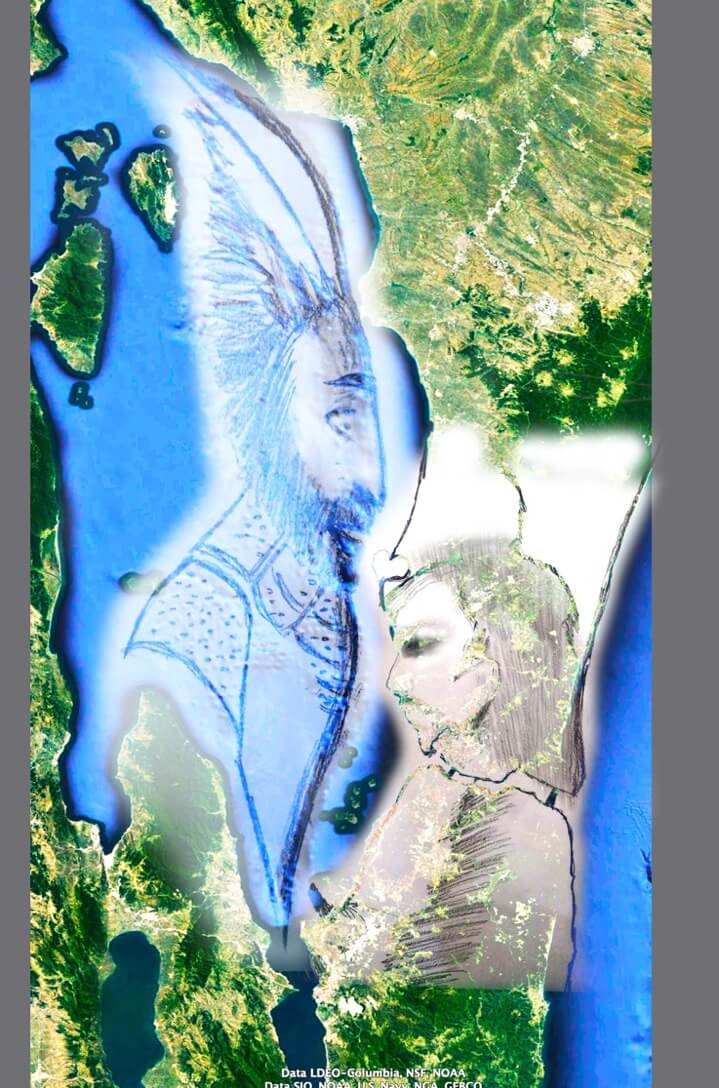 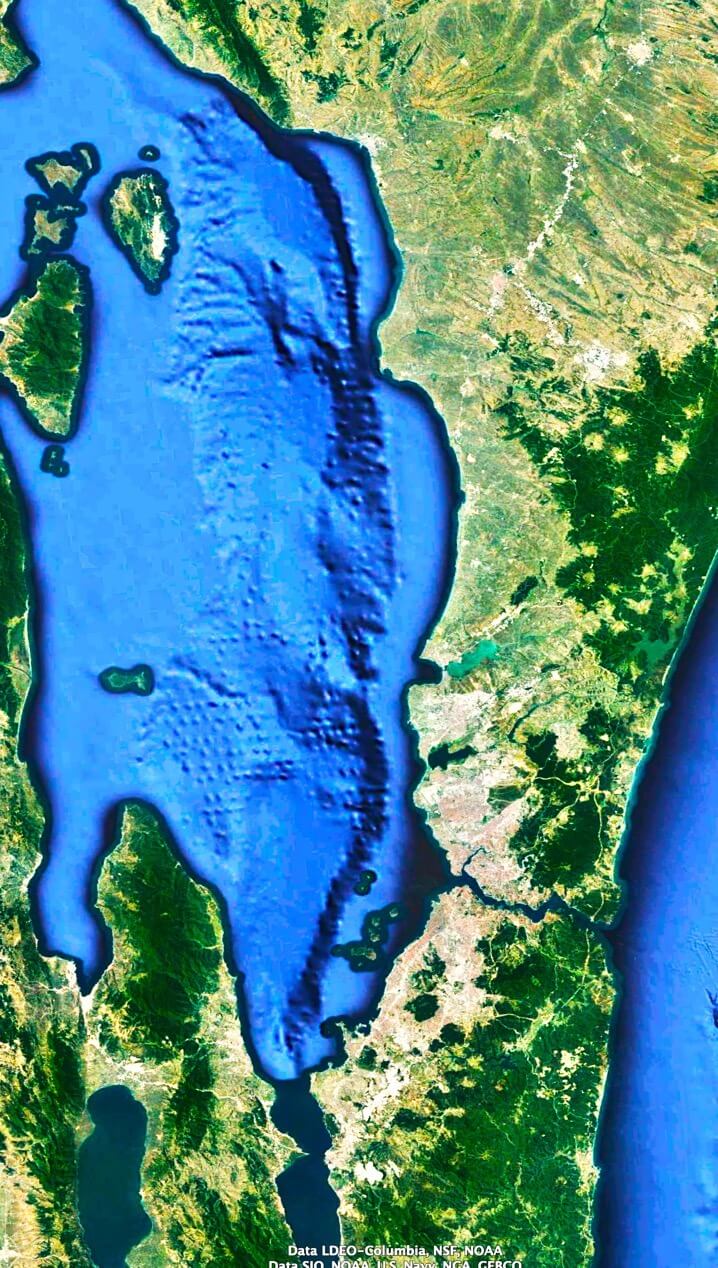 ORIGINAL DRAWING, NO CHANGING IN THE FIGURES. ONLY THE BRIGHTNESS OF THE SATELLITE IMAGE IS INCREASED

You must have noticed the bearded person who resembled the sultan or the commander in the sea.

There are no flaws in the drawing of this marvellous character features I see as follows;

“One can only know what he remembers”. Maybe we already remember everything from the coast and we see and draw them in movies, books …

A WOMAN SILHOUETTE IN THE BLACK SEA (Hz. Mary) 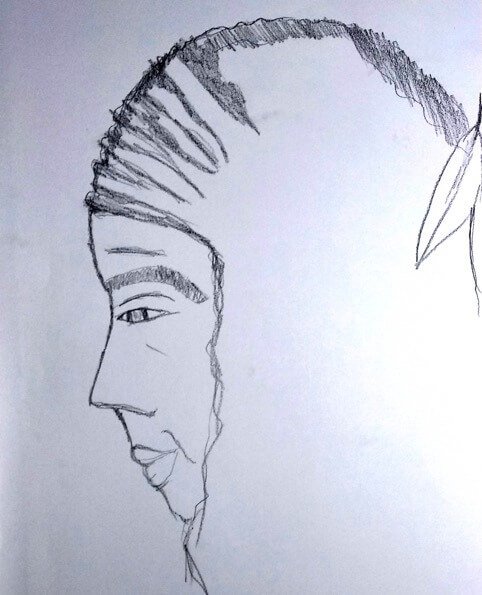 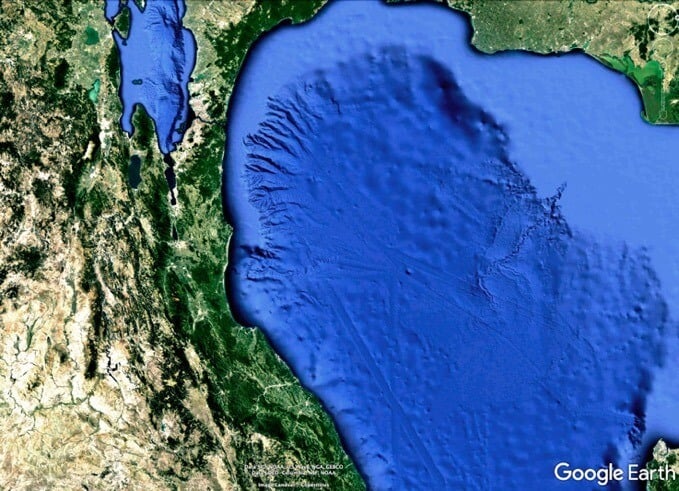 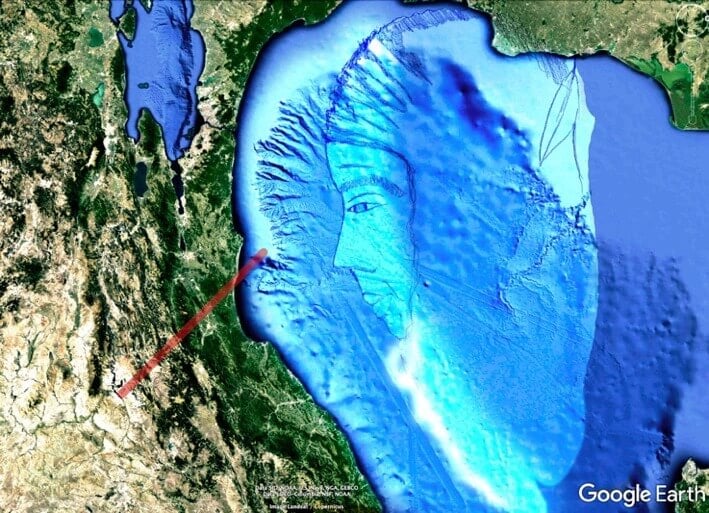 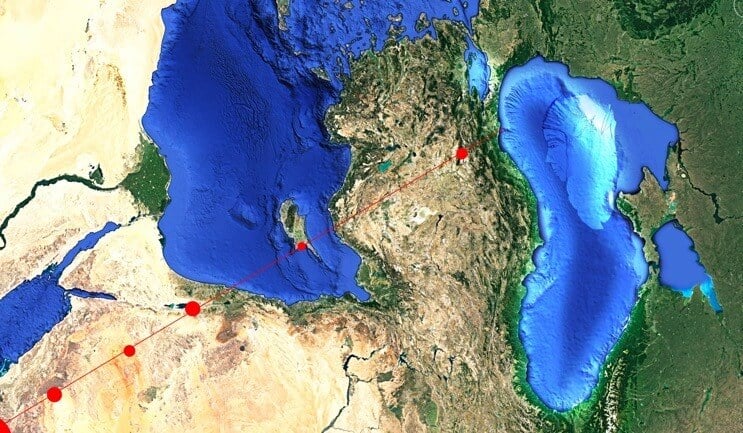 Here are some signs that the face of this loving and compassionate, lovingly caring mother is the silhouette of Mary and the holy spirit hidden in her;

No doubt; God, who has created everything and has no other deity, created our mother Mary, who is filled with the Holy Spirit, also created, Jesus, the son of God, who is full of the holy spirit and words. Both Mary and Jesus, and everything in the universe is in need of God. There is no other power to seek refuge from him. His knowledge encompasses all things, and everything else is destroyed because of him.