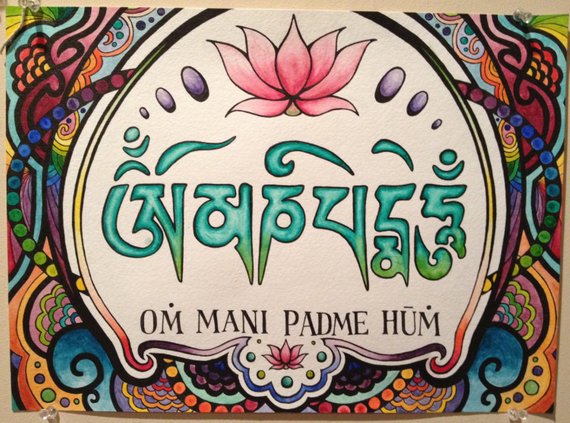 The most sacred mantra in Buddhism is “Om mani padme hum” (from right to left, read as “Muhammad Api Nammo” when reading in the order of the divine alphabets. (Nammu is the Creator God in Sumerian. And Midra is read backwards as Erdem (it is my name and its English meaning is “virtue”.)

In the video below, we listen to the statement that the famous Buddhist leader, the Dalai Lama, is trying to make about its traditional meaning. Until today, it meant “the Pearl in the Lotus.” I hope the world will understand that Pearl is the Prophet Muhammad. I will present them with hundreds of other proofs, by the grace and inspiration of God.  (God willing)

The Mantra appeared in the Sanskrit language in India. This mantra that the Buddha entrusted to his disciples, the Holy dhikr, which was repeated constantly, was a legacy of peace and embracing all the world’s religions. When this dhikr is recited in reverse, it is voiced as (Muhamed api Nammu). I mean, Muhammad who leads to Nammu. Nammu was the name of Abraham’s people, the unique and unincorporated absolute god who created everything in Sumer. Muhammad, on the other hand, was a prophet of mercy who commanded to believe in all the holy books of the world, the one God, and all the messengers who showed miracles and opened his arms to all mankind.

In other words, the Buddha bequeathed Muhammad, who accepted all the messengers on earth, and the one God who created everything, to all the people who believed in him.

Dictionary information about the word Api;
“Annexation by placing near or over, uniting, etc. its closeness comes to meanings such as ” the phrase that reaches to.
https://www.sanskritdictionary.com/?iencoding=iast&q=api&lang=sans&action=Search

The famous Sumerologist and historian Kramer noted the following translation in a Sumerian tablet in his book “Enki, The Cunning God of Sumerians” ;

On the tablet it is written as follows;

Nammu primary mother who had given birth to all the Great Gods, brought the tears of all the gods to her son (Enki):

– “You who lie at full length, you who sleep, you who will not awaken from his sleep: the gods” who come out of my hand”…are frantic with sorrow.

We understand from this text in the Sumerian tablet that humans call the Angels who controlled nature at that time Gods, even though they knew they were created. This means that they do not have absolute power and creativity over everything and that they know but respect that they were created. In the continuation of the text, Nammu states that he created all the gods, angels, with his own hands. In other words, while saying that Nammu gave birth to Gods, it is not procreation that is like a woman or with the character of a goddess, it is also called procreation that causes its existence by creating with its hands, especially in the language of that day. The concept of being a son is also understood to be an abstract concept that arises from being created with his hands without intermediaries, both in Sumerian texts and in the Torah, which is influenced by his concepts.

The Buddha lived about 1000 years before Muhammad and must have heard of Nammu in the age in which he lived. Because many Sumerians who emigrated from the Middle East or came for trade brought with them knowledge of their religion.  Although the discourse of words in each language may have changed with a few letters, the similarity in the middle leaves no room for coincidence.

Discovery: Erdem Çetinkaya Meta (Metta; Metta is reported as the genealogical name of the person expected in the sacred texts of Eastern religions)