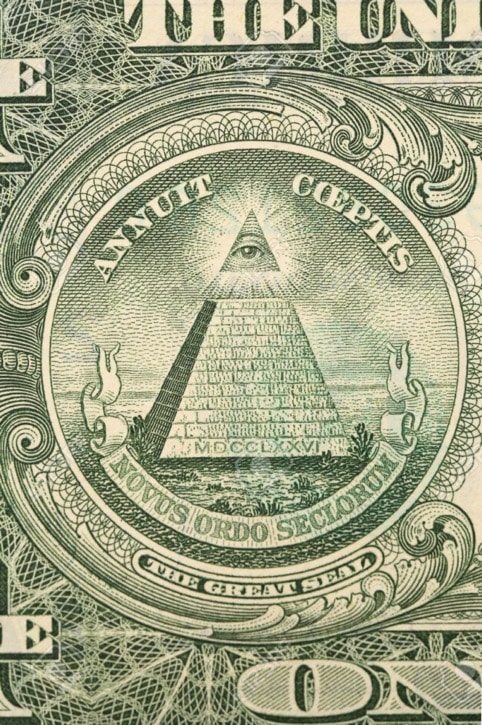 Clips, films, political leaders, symbols of the stock market and economy, from the names of the planets to the Nasa projects, the names of many months, all named after the Greek and Egyptian gods; it was desired to be glorified in this way. In a stinking world that is openly worshipped by idolator and false gods, each of which is the demons that enslave humans; we are in the ugliest time.

So much so that a clear picture of the Egyptian gods on American money; the eyes of Pharaoh, the archenemy of the Prophet Moses, and Horun, his god, were clearly laid out. Many people think that the Sumerian gods of Anunnaki were engraved with the name Annuid.

Although their beliefs differ in themselves, it is as follows. In Sumerian tablets, human creators have been described as God’s sons and daughters of the so-called universe. These are superhuman species advanced in science and technology with endless lives. Many concepts such as genetically developed human beings and shortenings of life or their bringing the flood; are written in Sumerian tablets. Therefore, they claim that all religions were originally inspired by Sumerian tablets. According to them, all religions are false prophets; the jinn is the kings that help people and are still watching. According to them the real creator has pulled aside and does not interfere; whoever takes power and manages it controls the world. There is no rule; there is power according to them. Money and gold are the main means of worship.

Their arguments are powerful enough to convince the uninformed people. The person comes and looks and sees that; the Sumerian tablets, which are the oldest texts, many things written in the Torah, the Bible, and Qur’an are described in detail here but in a slightly different way. He thinks that religions, like others, originate from different practices of legends in Sumerian. Because he is uninformed, he is easily brainwashed and becomes hostile to religions. For this reason, the enemy of Moses, Pharaoh and the symbol of his God was embroidered on the dollar. The mythology of Greek and Egyptian, which is hostile to monotheistic Hebrew religions, has been glorified. It is still used today as planet and day names.

What is written in tablets and many things in mythology are real. The Jinns, one of a number of angels, were born from the sky and possessed and enslaved the people. They lived with their supernatural powers and persecuted them. People have devoted and served sacrifices to them with fear. This fear was so great that mysticism spiritualism and esotericism became the sole occupation of humanity in those ages of mankind. The jinn gave power to the people they had made friends with and made them king, and through them, they ruled more easily. The flood happened for this reason and turned the Nephilim into spirits, but after a period of flood, they began to spread again and become stronger. There are world leaders who worship the devil. You will also see evidence of these.

THE NAME OF THE DEMON RINGLEADER IS THE (FALSE) CHRIST DEGGIAL.

The Prophet gave wonderful and miraculous information about the Deggial as he wrote in the books 1400 years ago.

In the middle of his forehead, it is written Deggial in such a manner that everyone can read.

It comes out of a stony place.

1  Look on the dollar. You will see the symbols of Ra and Horus, the Egyptian Sun God, who claims to be the One-Eyed and human god. And it is in the Egyptian Pyramid, built with one eye stones, which glorifies this idolatry. And you’ll be very surprised. Immediately below the symbol of God, you see the word Christ Deggial, written in consonants.

On the American money depicted with the so-called Egyptian Sun God Ra and his son Horus, it is clearly written the following: “We trust our God ”. They made it clear enough to depict which god it was. The 13th apostle gave up Jesus and was asked to be crucified on the 13th day of the month. For many reasons, those who love Jesus hate 13, and in many other places and buildings, houses 13 has been omitted. On 1 dollar, almost everything has been taken care of as 13. How much evidence do we have to prove that these people are devils and their worshipers?

Annuit Coeptis= God that is the Egyptian god is translated as he supports the order. What this order is written under the pyramid; “Secular, that is irreligious and Godless world order”. According to many researchers, Annuit symbolizes the ancient pagan gods AN and the Egyptian city ANNU and the people of the sky, who call themselves sons of gods, who enslave people.

The descendants of the devil who played the so-called god-kings in Egypt were part of the Kings chain in almost every kingdom that was founded later, even in Rome. Today, this tradition continues. The king of a state, either openly or secretly, had to be a descendant of the devil. The king of Rome was able to turn the religion of the great and unique Jesus on ascension into idolatry. How?

It is clear in the Bible that Jesus was born in the spring while sheep were grazing. But December 25, the day of sun worship is celebrated as Christmas. The world that lives the longest night on December 21st starts to rise on December 25th with the resurrection of the sun that remains dead for 3 days.

One of the very strict rules in Judaism is the sanctity of Saturday. But to be made sacred Sunday, Jesus’ resurrection was taken back early and while the Prophet Jesus must remain underground for 3 days, he was removed from the soil in 2 days. In the way of coercion, Sunday is proclaimed as sacred. Because Sunday was the day of worshipping the sun. That’s why its name is Sun-day.

Easter holiday and rabbit figurines are again an ancient pagan action. God was declared the only son of the creator or the God of God as the Egyptian gods, with the complexity of the concept, such as himself or both at the same time, even though Rome had said that God was the prophet and servant of God.

I will explain later how our precious guide and Prophet Jesus had destroyed his true religion and the great facts about him.

Now let’s see how Satan rules the world and how to defeat him in a day.