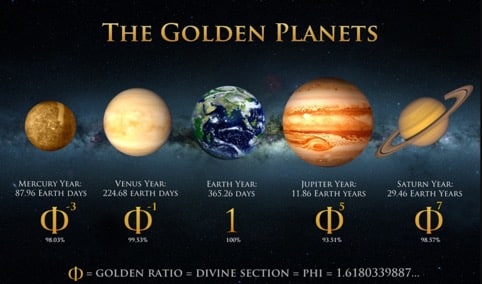 THE GOLDEN RATIO IN THE EARTH, THE MOON AND THE SOLAR SYSTEM

Of the 8 known planets in the system, 5 main planets; that is, the days when the inner planets and the largest of the outer planets turn around the sun were designed by the creator according to the golden ratio. These five planets were chosen because they had unique life cycles that I could explain later.

Ceres’s distances to the sun are analyzed in the asteroid belt formed by the 9 dominant planets in the solar system and the fragmented planet. 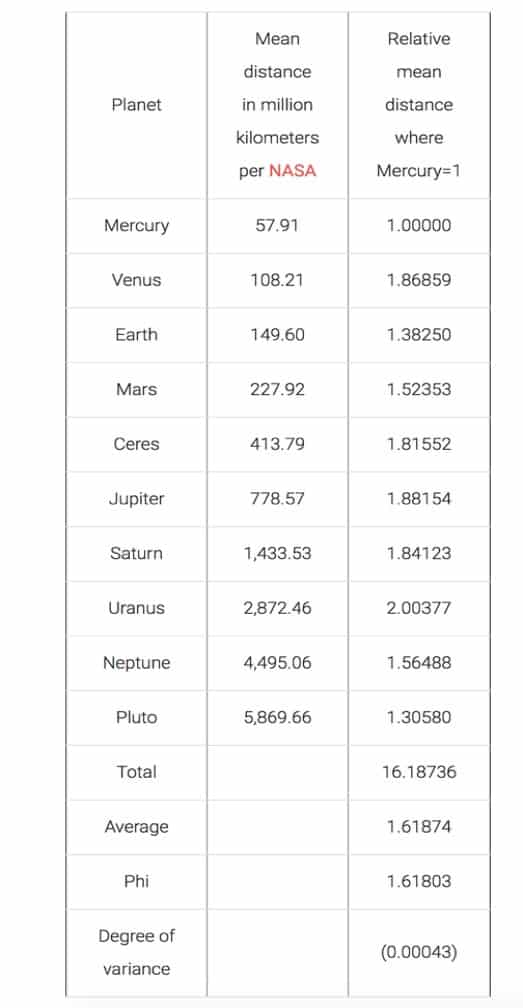 The distance of Mercury to the sun is taken as 1 unit and is proportional to the distance of the next planet to the sun. When this process is done consecutively with all the planets, it is seen that the average increment value of the increasing distance between the planets fits perfectly to the number of golden ratios. The planets were more stable in their orbits than when they were first created, but our solar system, which reached the middle age, is about to break the golden ratio design due to the shrinking time and external influences.

THE GOLDEN RATIO IN SATURN

Saturn, the unique planet shining in the sky above the world like a crowned king in all planets. People have long worshipped it for thousands of years, assuming it was a one-eyed or crowned God. Saturday, the 6th day of the week, is a blessing of Saturn. Western civilization gave the names of the beings that they thought were gods to all days and months. All paganist beliefs aside; as it was the most beautiful planet of stars shining in the sky, the golden ratio was revealing in many ways.

The space inside the Saturn rings is located at the golden ratio point of the ring.

The width of the ring and the distance from the inner line of the ring to the Saturn surface is also the golden ratio.

The width of Saturn and the distance from the surface to the outermost point of the rings is again the golden ratio.

The ratio of the distance between the front and back of the gap in the ring is again the golden ratio.

When the world and the moon merged, 3 golden ratios were revealed at the same time. 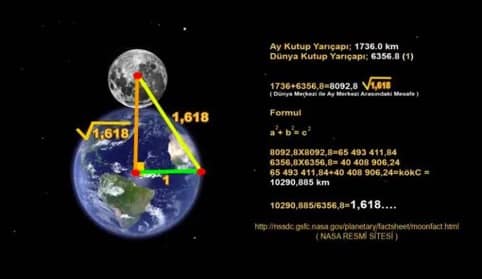 The most powerful theory of the formation of the moon is that some of the particles scattered from the earth colliding with a planet are formed by the accumulation of the Earth in close orbit. Scientists state that some of the scattered parts are reunited with the rest of the world and the rest of them are formed in orbit like satellites. In other words, when the world and the moon first formed, it was like a whole. In time, it moved away and went back to its current position. In the picture above, you see the extraordinary golden ratio triangle that appears when the earth and the moon are combined.

When the equatorial radius of the world is considered as a unit, the distance between the earth centre and the lunar centre is the root of the golden ratio and the opposite edge of the triangle gives the number of the golden ratio.

In scriptures, the creator said, apart from other celestial bodies, he subjugated the moon and the Earth, forming them according to a measure. Scientists did not anticipate that they would encounter such symbolism in the design of the Earth and Moon at an intertwined rate.