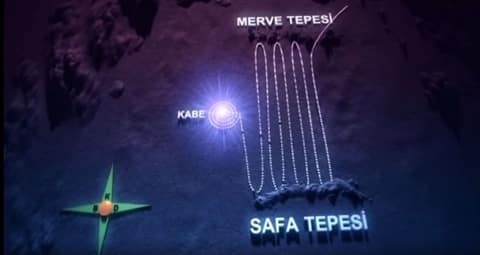 THE MIRACLE OF THE SIGN OF GOD IN THE PILGRIMAGE

I was wondering why we had turned around the Kaaba in the pilgrimage, and why we had come and gone between the two hills next to it, and the answers I had received from the books had not satisfied me fully. In them, it was said that we imitated the search for water for the baby of our Hacer Mother. I believed it should have a much bigger and more spectacular cause.

The video in my documentary, Sacred Mysteries: https://youtu.be/DrKRPWvvIUA?t=40m51s

I closed my eyes and imagined the way the pilgrims walked. I saw that the footprint left on this path, consisting of 3 arrivals and 4 departures, and the chain of the band of pilgrims was only the word of God, which appeared from the sky, before each other and following the shortest path. There must have been a sign in the Qur’an that proved this inspiration, and as soon as I opened the Qur’an, I saw this:

“( In the pilgrimage)…one’s deference to God’s signs is because hearts avoid opposing God.”

Passing from Arafat to the stopping place by stoning the devil, reaching the sign of God and entering into the symbol of God’s sign that has turned into roads, providing flow there and dignify God. This is the spiritual arrival of the servant, symbolizing the purpose of life. Man was invited to contemplate what he did. But the one who knew his secret did not come out.

Many more golden signs were hidden in the Qur’an. His name was given to the age when mankind would reach their peak and discover their Lord with it.