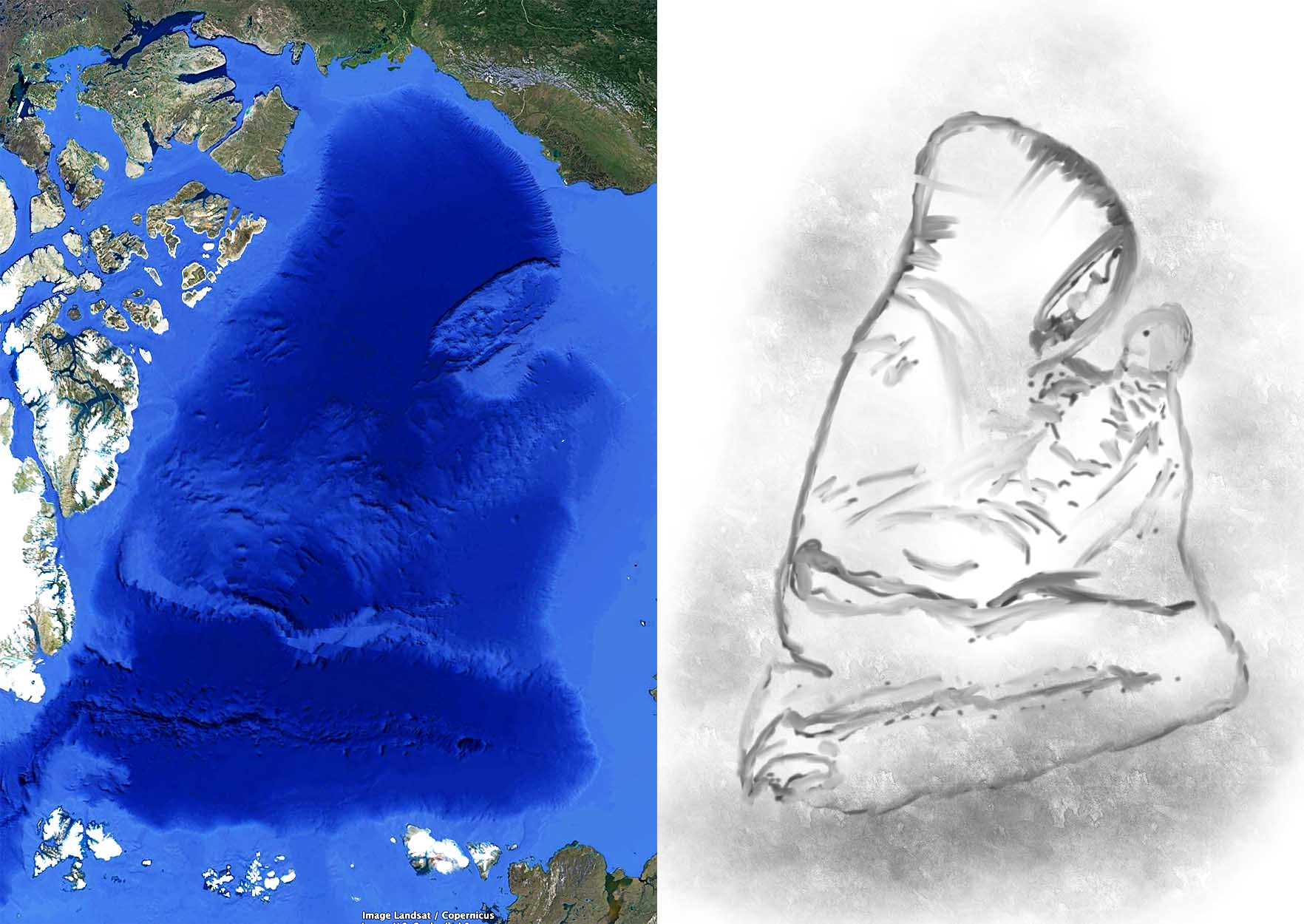 The Lord who created everything with magnificent meaning and reason. Could it be that he randomly painted the world? See the top of the world in Google Earth. The exact 0th latitude is to the center of rotation. You will see a figure with a disguised face, cloaked, sitting with a baby in hand, as large as continents and in human form.

Although those who first see this figure see them as Mary and Jesus, when looked closely, the situation is different. Because that hand-held baby face looks more like the first primitive human child, whose mouth stood out more than a normal human being. 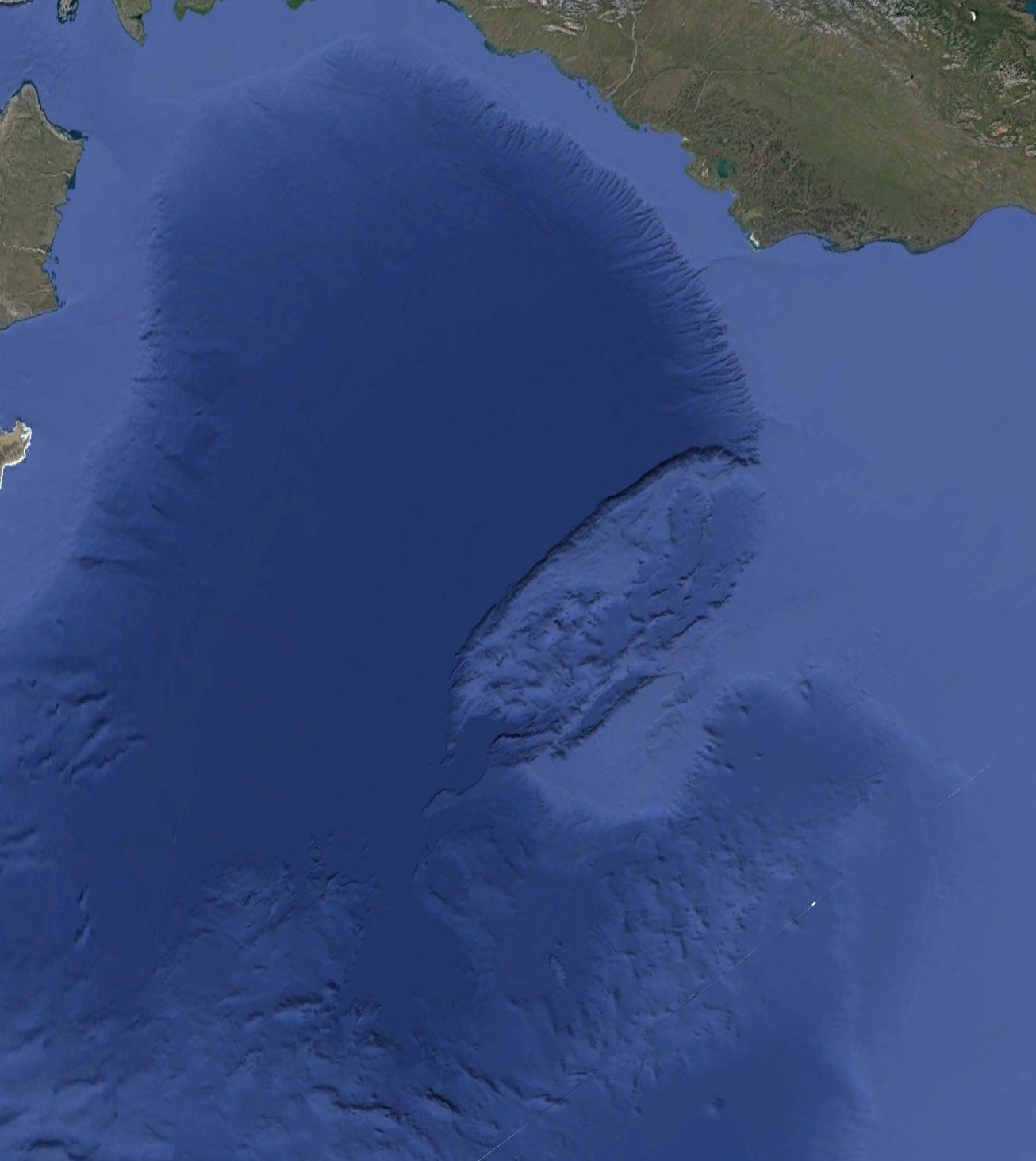 And the same face silhouette appears as a reflection on the face of the person sitting in the cloak. We understand here that this face profile symmetry, which is beyond coincidence, is the reflection falling into a glass bowl. In other words, both the presence of a reflecting glass in the middle and the fact that the baby looks more like a humanoid than a normal person shows that they are not Jesus and Mary.

However, because this image is on the top of the world, other angelic silhouettes in the world also bow to him and circumambulate around him, there can be only the creator god who appears there. Aurora rays occur only at the north pole and shine like a crown of light on the picture of the Lord. The whole world and the silhouettes, except for the serpent and dinosaur-viper shapes, have submitted to the Lord and revolve around them.

So, why is the sea preferred over the land for the silhouette of the Lord?

The scriptures say that the Lord has a throne on water and that He created man in his own image, with both hands. The baby in the figure looks like a humanoid from the first human species.

Torah Genesis 1: 2… God’s Spirit was hovering over the waters.

Torah Genesis 1: 26 The Lord said, “Let us create human beings in our own image, similar to ourselves.”

Quran 38; 75 (the Lord said); O devil, what prevented me from what I created with both hands and you did not prostrate?

And the enemy of humanity, the one-eyed rebel devil. He deceived Adam and Eve in the form of a serpent in heaven.

In addition, there is another being with a cloak and a veil that leaves the sea and reaches out to the Lord’s feet and calls out to him. This reminds us of the Sumerian Creation Myth, one of the most famous creation myths in the world. A poem in the inscriptions almost animates this landscape.

Kramer describes this chapter in his book “Sumerian Mythology” as follows.

The poem begins with an introduction to what might be called a description of the difficulties the gods suffered in providing bread, especially after the predictably female deities came into existence.

The gods complain, but the water-god Enki, the Sumerian god of wisdom, can help them. But he sleeps so deeply that he does not hear them. Thereupon his mother, “the mother who gave birth to all gods”, the primeval sea brings the tears of the gods to him and says: “O son, get up from your bed ….. show your wisdom, form servants to the gods, form them … they produce them.”

Enki thinks about the subject, “he takes the head of the good and noble shapers and says to his mother Nammu, to the primeval sea: O mother, the creature you speak of, has been created, Place the gods … on it; Knead your heart from the clay on the surface of the seabed, They will wait for the good and noble shaper clay. You, you expose his limbs; Ninmah (earth-mother goddess) will work on you, … (the birth goddesses) will be with you while you form; O mother, determine the fate (of the new nature), Ninmah will place the gods … upon him, … as man …

However, the Sumerian texts are at times contradictory. The names of the angels who are the representatives of the Lord on earth and some of their works reached the Sumerian people. However, the demons that took them under control later and the corruption caused by the verbal transmission caused them to be associated with bad deeds and revealed a polytheistic religion. Therefore, even if this table describes this event in the Sumerian inscriptions, everything described in the Sumerian myths cannot be said to be correct. I have elaborated on the true identity of the Sumerians and Anunnaki in another article.

UNDER EARTH, SOUTH POLE, THE PICTURE OF THE DEVIL (SNAKE)

The Lord threw him to the lowest of the low. As an example, a picture of it was drawn at the lowest point of the earth, at the south pole, away from his Lord.

Isaiah 14
O devil, He said, “He will rise to the skies, above the clouds,
I will equate myself with the Highest. ” you were saying
But to the land of the dead,
To the bottom of the death pit
You’ve been thrown away.

I’ll show it over time. There are angelic shapes as large as continents on Earth. They stand with their shapes facing west and bowing their neck to the north pole.

“Quran 99: 4 The earth will tell its news when the apocalypse comes.”

Know that all religions come from one and the same source, and the Lord shows you His miracles so that the world may unite and peace and good may prevail. The Lord gives the good news that he will come soon.

You will continue to see 109 great new miracles with me that I will share.